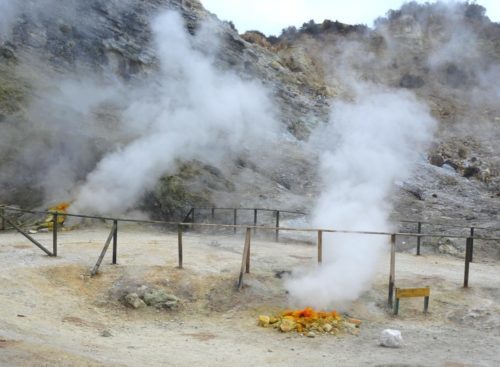 We proposed a new multiphysics approach to better image and understand fumaroles in volcanic areas.

The Solfatara crater is the main degassing area of the Campi Flegrei caldera (Italy) (Fig. 1).

Figure 1.  Location of the Solfatara volcano in the Campi Flegrei Caldera (Italy). 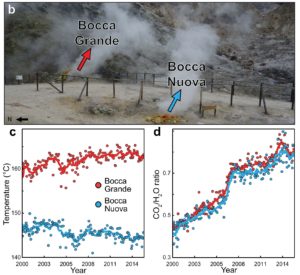 Figure 2. (b) The two main fumaroles at the Campi Flegrei caldera: Bocca Grande and Bocca Nuova with the evolution of (c) temperature (°C) and (d) CO2/H2O mass ratio.

In this study, we aimed to understand the origin of the geochemical distinctions between these neighboring fumaroles. To this end, we first built a high-resolution structural model of the fumarolic system using electric and seismic methods. Our 3-D model delineated the shallow gas reservoir that feeds the main fumaroles, and showed, for the first time, the existence of two distinct channels (Fig. 3 and Movie 1).

Movie 1:  3-D animation of the fumarolic system, as well as the processing of seismic sources to retrieve the Bocca Nuova conduit.

From these high-resolution images, we used a thermodynamic code (TOUGH2 EOS2, Pruess et al., 1999) to model the multiphase transport of the water and CO2 mixtures, which revealed an hydrothermal interaction with the contamination of Bocca Nuova fumarole by water condensate (Fig. 4).

Such modeling of fluid interactions will allow for the simulation of dynamic processes of magmatic degassing, which are crucial to better monitor volcanic unrest.