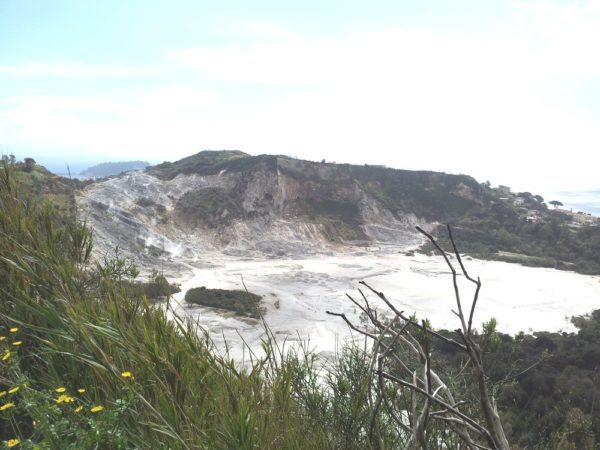 We present the first 3-D subsoil image of the Solfatara volcano revealing its shallow hydrothermal system.

The Campi Flegrei caldera is located in the metropolitan area of Naples (Italy), and it is one of the largest volcanic system on Earth (Fig. 1a). Since 1950, this volcanic complex shows significant unrest,  mainly localized beneath the Solfatara crater (Fig. 1b), which accelerated over the last decade (Fig. 1c-f).

Recent studies indicate that the volcanic system is potentially moving toward a critical state, although their authors remain unable to point out when and where a possible eruption could take place. The difficulty of predicting the real volcanic state is here mainly related to the presence of a well-developed hydrothermal system. Indeed, at the Campi Flegrei, it is difficult to separate the magmatic input signal from the hydrothermal response. 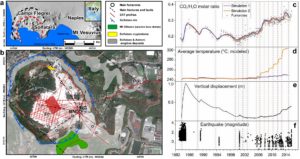 We evaluated the contribution of surface conductivity with respect to fluid conductivity to separate liquid-dominated structures from clay-rich areas. For this purpose, we have measured soil pH and Cation Exchance Capacity at 27 representative locations. We thus found that electrical resistivity was mainly controlled by fluid conductivity due to extremely acidic soil (pH <2), which prevents the formation of conductive clay minerals at shallow depth.

We identified the 3-D structure of a gas-dominated reservoir at 60 m depth (unit “g”, 20–40 Ω·m, Fig. 2) that feeds the main fumarole Bocca Grande (BG) through a ~10 m thick channel (Movie 1 below). In addition, the electrical resistivity model revealed a channel-like conductive structure (unit “c”, 1–7 Ω·m, Fig. 2), where the liquid produced by steam condensation around the main fumaroles flows within a buried fault down to the Fangaia mud pool (F) area (unit “a”, 1–5 Ω·m, Fig. 2).

Movie 1. 3-D electrical resistivity model of the Solfatara crater (Ω m), draped over a surface temperature (°C) map. The video slices the volcano from W to E and reveals the Fangaia liquid-dominated plume, Mt Olibano, Solfatara crypto-dome, eruptive deposits at the top of the rim, and the resistive gas-dominated reservoir feeding the BG fumarole thought a 10-m tick resistive channel.