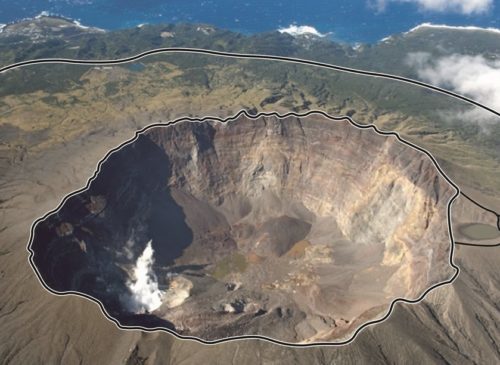 Phreatic and phreatomagmatic eruptions represent some of the greatest hazards occurring on volcanoes. They result from complex interactions at depth between rock, water, and magmatic fluids. Understanding and assessing such processes remain a challenging task, notably because a large-scale characterization of volcanic edifices is often lacking.

To study such hazards, we focused on Miyakejima Island in the Izu-Bonin volcanic arc (Fig. 1), since it is an inhabited 8-km-wide stratovolcano with regular phreatomagmatic activity (see the scientific article Gresse et al., 2021 published in Journal of Geophysical Research: Solid Earth https://doi.org/10.1029/2021JB022034).

Figure 1:  Overview of  the Japanese archipelago and the Izu-Bonin volcanic arc with Miyakejima volcano 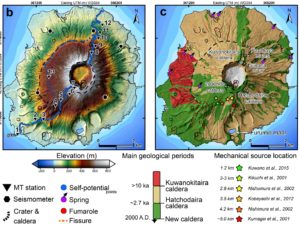 We identify a shallow aquifer lying above a clay cap (<1 km depth), and reveal its relation with magmatic-tectonic features and past eruptive activity (Fig. 3). At greater depths (2–4.5 km), we infer a seismogenic resistive region interpreted as a magmatic gas-rich reservoir (≥370 °C). From this reservoir, gases rise through a fractured conduit before being released in the fumarolic area at ~180 °C. During their ascent, these hot fluids cross a ~1.2-km-long liquid-dominated zone causing local steam explosion. Such magmatic-hydrothermal interaction elucidates (i) the origin of the long-period seismic events, and (ii) the mixing mechanism between magmatic and hydrothermal fluids, that was previously observed in the geochemical signature of fumaroles. Our results demonstrate that combining multidisciplinary large-scale methods is a relevant approach to better understand volcanic system, with implications for monitoring strategies. 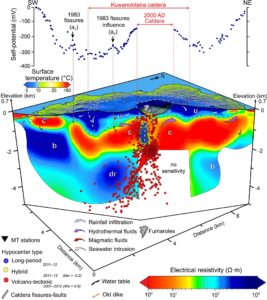 Finally, we propose the first comprehensive interpretation of the volcanic island in terms of rock properties, temperature, fluid content, and fluid flow (Fig.4) 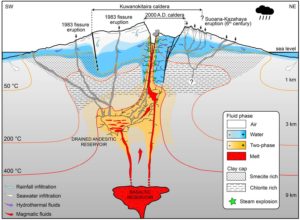 Figure 4: Interpretative scheme of Miyakejima plumbing system after the 2000 A.D. eruption. The partial drainage of the shallow andesitic reservoir (2.5–4.5 km bsl) due to the NW migration of dikes toward Kozushima Island (orthogonal to this cross-section), and the subsequent formation of the 2000 A.D. caldera have induced an expansion of a gas-rich region, trapped beneath a low-permeable clay cap. The aquifer position is controlled by the upper clay layer, and is influenced by recent volcanic activity (e.g., 1983 fissure eruption, west black arrows), and tectonic structures (e.g., Kuwanokitaira caldera). The location and the thickness of the aquifer affect the nature of the eruptive activity: explosive events are mainly located where a large aquifer reaches shallow regions (< 300 m depth, e.g., Suoana-Kazahaya eruption), while effusive activity occurs where the aquifer is deep (> 300 m depth) or thin. A water-rich region progressively developed in the fractured conduit formed by the 2000 A.D. caldera collapse. In this area, the heat originating from the degassing activity and the basaltic intrusion produces minor steam explosions (green stars) at the interface between gas and liquid-dominated regions. This magmatic-hydrothermal interaction induces the long-period seismicity signals down to 1.2 km bsl.